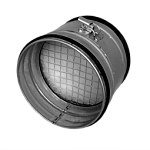 
Well made and robust, but it was not use for my application ...